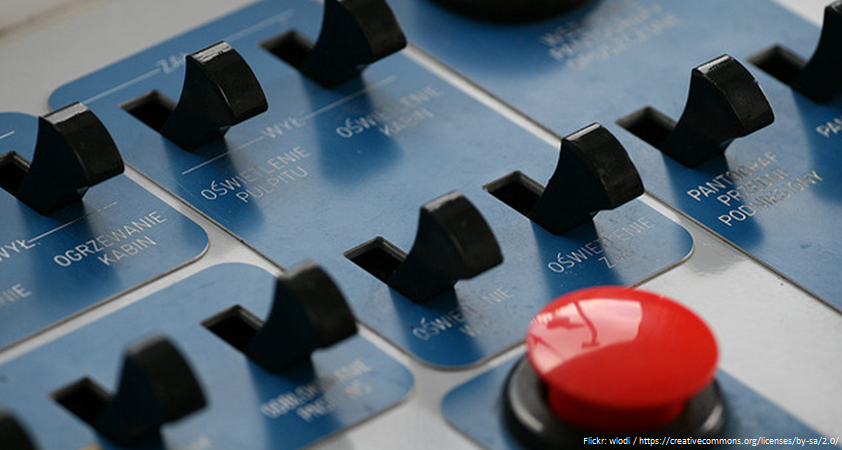 I’m going to write a series of posts about the core elements of a decision model.  This one’s about Levers: simulations of things you can change as you make the decision.   We might also have called levers choices.

It can be confusing: you’d think that a decision model would produce the choices as output, not as input.  Because it’s supposed to tell us what decision to make, right?  But things are a little backwards: the right decision is the one for which the levers will set in motion a chain of events, that in the future will lead to a desired outcome.  So from this point of view, the action of a lever belongs at the beginning of a decision model, not the end. Imagine a domino, which once toppled starts a chain reaction leading to some result.  You have a number of starting dominos to choose from, each of which leads to a different path.  So the cause-and-effect chain moves forward in time from the levers, and so the right one to choose is the one that leads to the best outcome.  So while the result of decision modeling is a choice of levers, the process of doing that modeling is to simulate a process in time that begins with the decision and the action representing the lever.

By convention, we draw levers on the left and outcomes and goals on the right.

A few examples will make this clear.  Imagine a retail store chain is seeking to decide whether to install solar panels on its roofs.  This decision will have an impact: on costs to the business for the panels, but also on savings in payments to the electrical grid down the road.

Or an African country is looking to cure AIDS.  How much should it spend on medicine, and how much on training health care professionals to teach their patients how to use the medicine?  This is a tough decision, because every dollar spent on training reduces the supply of life-saving medicine.  Yet the medicine’s effectiveness will be drastically reduced if doctors aren’t taught how to teach their patients how to take it at just the right time every day.

What about a product manager at a new software company?  She has to choose the right price for the product, and the right launch market.  To make this choice, she’ll model (either between her ears or using a tool like World Modeler) how the price will drive purchasing behavior, how the choice of market will drive launch costs and will interact with the price, and more.

One of the most widespread kinds of levers are investment decisions: how much to spend to launch this new initiative?  Investments usually result in going “into the red” in the short term, in order to reap long-term benefits.  So a good model—whether in the brains of investors or modeled explicitly using software—is essential to success.

As you can see, each of these decision levers is effectively a choice to be made.  And the choice of the right lever is the goal of decision modeling. What’s different about this approach compared to many others is that the choice is treated in this approach as the prime mover in a complex system of cause-and-effect, which may include feedback effects, chaotic behavior, and strange attractors.