Decision Intelligence and the Tragedy of the Commons 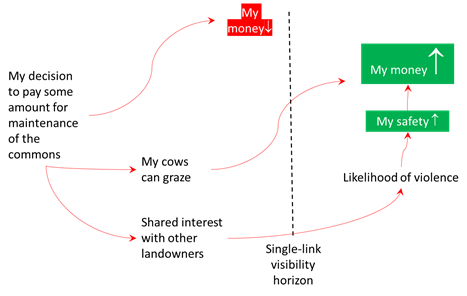 Please take a careful look at the above diagram (it is a simple Causal Decision Diagram (CDD), as described in Link). It is, by my understanding, one of the most important patterns we face as a species. A decision to contribute to a common good—in this case money to maintain a shared place for cows to graze—can produce a bigger long-term benefit to you than if you just kept the money to yourself. No social conscience required for this, just the ability to see beyond the “visibility horizon” shown as a vertical line in the picture.

Being unable to see this pattern is known as the “Tragedy of the commons“, as originally named by Gerritt Hardin. Today, as my mom wrote about recently, the commons has now expanded to a planetary level. So our problems aren’t separate: climate, conflict, the economy, culture, democracy. Rather, they are all facets of the same problem, which is deeply interconnected.

Replace the decision above with health care for all, and we can see that—if we can convince ourselves that each link is true— a more productive society will lead to a healthier economy.

A rising tide raises all boats.

Replace the decision with an investment in education, and we can see that a more educated society is a more prosperous one, which, again, even benefits the wealthy, it seems to me.

Our only task, then, is to gather evidence to convince ourselves that each link is true, and then to measure and modify each one to ensure it continues to be true after making the initial investment. Then each separate commons needs to be understood in relation to the others, because the interdependencies are massive.

AI and big data can help here (if we already have data lying around from some other purpose), as can plain old-fashioned experimental methods (if we have the resources to design experiments to create new data).

What do you think?