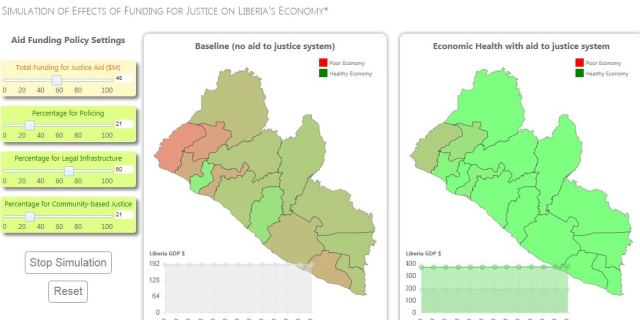 In our years building decision intelligence models for domains like banking, telecom, and more, the project that I am most proud of is the work that we did for Liberia in collaboration with The Carter Center.

The basic idea: countries are complex systems. Understanding how to recover after a conflict or disaster can be a particular challenge. Decision makers often end up working accidentally at cross purposes, due to shared, but invisible, mental models of a situation. This often produces unintended negative consequences.

Amongst its sub-Saharan neighbors, Liberia has received particular attention as a model for improvement elsewhere. As in other post-disaster or post-conflict situations, there are nonobvious second- and third-order effects of interventions, and a deep systems understanding of the situation is critical to making the decisions that produce the best outcomes.

Before our project, Ushahidi worked with The Carter Center to build an interactive case map of the country, which is very helpful to understand the legal situation there.  However, it is possible to go beyond data exploration to interactive decision simulation.

I believe that an interactive decision model, especially if it is web-based and informed by real-time data, can be very helpful in “connecting the dots”: understanding how signals can be found in otherwise noisy data, applying “moneyball for government” principles, along with machine learning and predictive analytics, to a particularly wicked problem. This is my vision, and this little project was a start.

This project was conducted before the Ebola crisis. It showed how decision intelligence can shed light on the interactions between Liberia’s legal system, economy, the police force, and more.  In particular, we sought to understand the impact of the Carter Center’s Community Legal Advisor (CLA) project. As a small project, this only produced a preliminary model, from which solid conclusions cannot be drawn.  However, I believe we have contributed a first rung to the ladder required to solve the most difficult problems of our age.

We built our model in the desktop version of World Modeler, produced a video, and wrote a white paper that you can read if you’re looking for a deep dive.  More recently, we built a web-based demonstrator, which you can try out at the bottom of this post.

The key contributions of our work can be viewed as hypotheses, which are that: So below is our web-based model.  It doesn’t quite fit in this blog format, so you’ll either have to scroll around a bit, or might want to click here to see the model on its own page.

To run this simulation:

Note that this is only a conceptual demonstration of the simulator. The data used in the simulation is fictitious, is not intended to represent reality in any way, and should not be used as the basis for any decisions, nor should any simulation on this page be interpreted as either implicit or explicit claims about any real entities whatsoever.