Showing up: #Hack4Congress goes to Washington 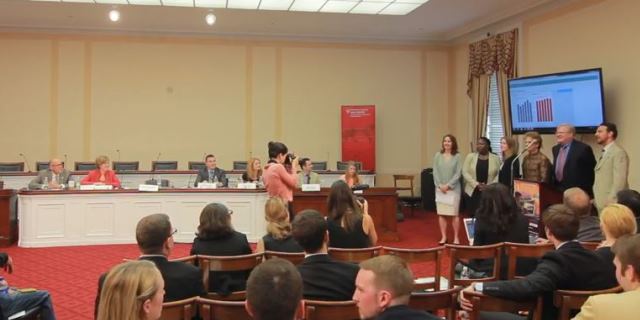 Earlier this year, the newly appointed White House CTO Megan Smith told Wired Magazine that the tech industry needs to “show up” in DC.  It’s starting to happen: award-winning teams from around the country flew to Washington earlier this week to attend the #hack4congress finalist presentation, which you can watch below.

Voicing a sentiment shared by many participants, Abby Alger, from the Office of the House Republican Conference Chair, said that “Government right now is very reactive… How can we get data ahead of time?… before it becomes national news, somebody knew about it…we live in an era of real-time data, so the closer that gets to Congress the better we will be.”

Hack4congress/a> seeks to change all this, with increased information access to the citizenry, along with using technology and data to facilitate more effective government.  It is a project of the OpenGov foundation,  in association with the Harvard Kennedy School Ash Center for democratic government and innovation, and  support from Darrell Issa, OpenGov co-founder and chairman of the board.  OpenGov identifies itself as a “scrappy little outfit working to open government,” and is sponsoring “data-driven disruption” to break down the barriers of closed, inaccessible, and unaccountable government.  Supported by a grant from the Knight Foundation, OpenGov’s  grew out of the 2011-2012 protests against SOPA and PIPA.

#hack4congress teams in DC, Silicon Valley, and Cambridge were challenged to build solutions in five areas:

Over 630 people competed nationwide, and the three finalists presented to Rep Darrell Isa (R-CA), Rep Susan Brooks (R-IN) and Rep Greg Walden (R-OR), along with a number of congressional staffers.

Unlike many other hackathons, this one emphasized bridging the gap between technology and users, and welcomed non-coders.  Said award-winning C-Dash team member (and my friend) John Kelly, “the challenge is to make the data gathering process dramatic enough that people hang in there and use this information to make a decision”.    Kelly went on to comment that understanding the needs of staffers was critical for his team, and that he believes that part of the reason that his team won was their vision, as opposed to a purely technical focus.  C-dash team leader Kate Wing was able to articulate a bold vision for reducing information asymmetry, which caught the imagination of the judges and culminated in her presentation at the House of Representatives.

Wing said her team answered the question: “How could we help Congress get the information they need rapidly and easily to help inform the difficult policy choices you have to make every day.”

She went on to say that “We know and we understand that one of the [greatest] challenges, of working in Congress is time: your days are very busy, you’re highly scheduled, and most staffers-not to mention members-are expected to be experts in every topic that ever needs to have a policy made on it, ever since the dawn of time, which is a lot of topics. .. You don’t have time..to track down data… ”

“[This] creates an information asymmetry that we see as a challenge to democracy overall… because that means that the only people who do have time to do these deep dives into data and analytics are the think tanks and the lobbyists and the advocacy groups who come in and meet with you.”

Said Caleb Smith (@calebjsmith), from the Office of the Speaker: “You don’t want to have to wade through an Excel sheet for hours and hours.”

Rep.  Issa commented that it is often in the best interest of lobbyists to “bushwhack” staffers with data.  It would be very powerful, he commented, to make information available before meetings, to do A/B comparison between statistics, which C-dash team member Fabion Kauker called “colliding information in a digestible way”.

Commented Rep.  Issa, “Whatever proponent A and proponent B believes, and making it available to a broader public, then it is available to criticism.”

The second team, which had a Microsoft focus, produced a demo of its “Coalition Builder”: which produced analytics for “political match making”.  Colaition Builder allows users to filter data based on elected officials, to understand the areas of focus and expertise of different members of Congress.  It allows users to drill down by chamber, by party, and more as they explore information about their representatives.

The third winning team was called CongressConnect. It built a platform for helping citizens to meet up with constituents, educating constituents before those meetings, and tracking follow-up. Constituents can directly request meetings on the Hill or in their district office, access tutorials to prepare for their meeting and connect with other constituents who share their advocacy goals.  It was designed by Taylor Woods, Chris Baily, Kat Kane, and Jessie Landerman.

Readers of this blog won’t be surprised at my own take on all this: it’s absolutely necessary work, and I’m particularly excited about the efforts to bridge from the data to the users, and the emphasis on collaborative arguments about data.   I recognize, in addition, that “data is chocolate, not chocolate cake”, and that we need to go beyond it to a systems understanding.    Along these lines, I am delighted at Kate Wing’s brief statement about the future, in response to Rep Issa’s comment that there was a lot of work in front of the team going forward: “when we started.. [we said] we’re going to build simulated tradeoff models that allow you to forecast policy impacts for the purpose of identifying causal linkages between datasets.”  This is exactly the right direction.

Congratulations to all three teams for tremendous work!