Ted Danson does Decision Intelligence in The Good Place 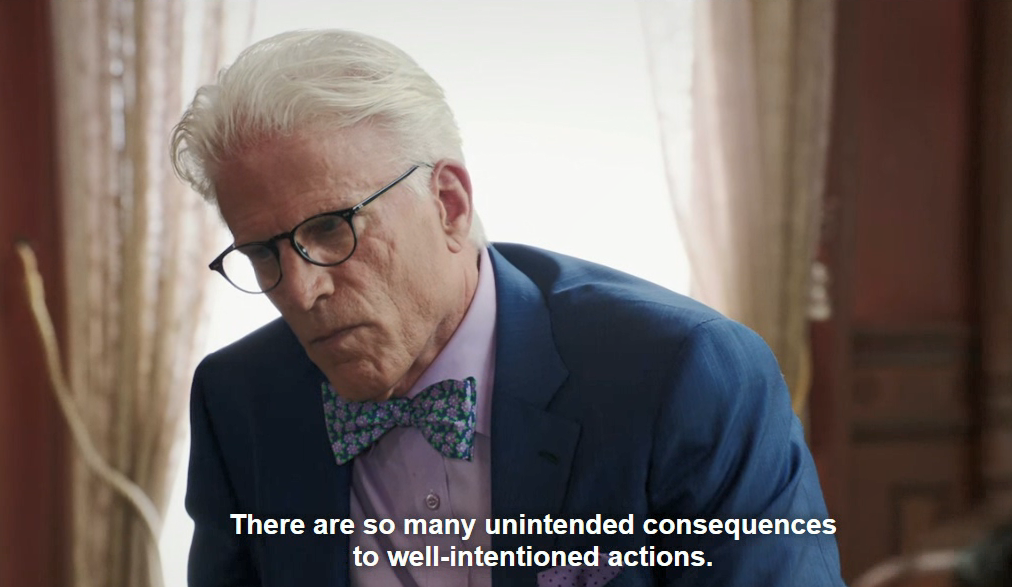 As I write about in Link, and as we discussed in the Responsible AI/DI Summit Science Fiction Panel last week, DI must be democratized—understood by everyone—to maximize its value and to ensure that we minimize negative consequences. Fiction: television, novels, movies, and more, are therefore critical for its positive impact on the world. With Season 3, Episode 10 of Michael Schur’s The Good Place, this has happened, to my knowledge, for the first time.

(Note if you are receiving this via email, you will need to view the article in a browser to see the videos.)

Reformed demon Michael (Danson) doesn’t understand why, for over 500 years, all humans, upon death, have been assigned to The Bad Place (hell) instead of The Good Place (heaven). Assuming at first that the system has been rigged, Michael realizes in this scene that it is, instead, the world itself that has changed.

In a complex world, actions have negative unintended consequences, and so the simple act of buying roses for your mother can create greater net harm than good.

“Don’t you understand? The Bad Place isn’t tampering with points. They don’t have to. Because every day the world gets a little more complicated, and being a good person gets a little harder.”

More from the series:

Previous episodes that explain the system in more detail:

Note that the above scenes includes Janet (D’arcy Carden): an AI that supports the season’s characters in fixing the system. In other words, actions and DI with an AI to assist. Sound familiar? The fact that teams as diverse as Silicon Valley, Hollywood, and more are thinking along the same lines is a good indication that we’re onto something here 🙂