The World Resources Sim Center: on its way to Silicon Valley 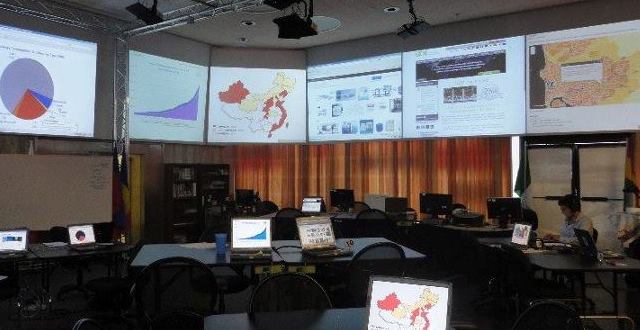 Last month I received an intriguing email inviting me to an event at Kimberly Wiefling’s house.  I’d met Kimberly before through Jonathan Trent, as part of the work I’ve been doing to help out the Omega Global Initiative.  I knew she was an international consultant, but it was great to also learn that she was passionate about systems thinking and visualization.  Jonathan and I drove up to Kimberly’s house together, where she and  Peter Meisen explained their initiative to bring a Buckminster Fuller-inspired Sim Center, based on a similar center in San Diego, to Silicon Valley.

The idea, says Kimberly, is that Buckminster Fuller laid out a vision for transforming the world through spontaneous cooperation. To realized this vision, people need to work together to make decisions, so having a visualization center where they can visualize data about the world is very helpful in group collaboration.

The San Diego facility provides “immersive visualization”, which physically surrounds participants with the issues, trends, and future projections relevant to firms and organizations.  The  SimCenter offers a meeting space to facilitate collaboration amongst an organization’s stakeholders (e.g. staff, suppliers and clients), working in teams to visualize concepts, problems, and opportunities, and then reporting to the group.

I spoke with Kimberly today to understand her current plan.  She told me that “We’ve been doing a pilot in San Diego with a 4,000 square foot facility for the past 4 years. We think it’s time to have a facility to address wicked problems here in Silicon Valley. The reason: In the same way that today Silicon Valley is an example of entrepreneurship that’s admired and copied globally, we intend for Silicon Valley to become a global example of a sustainable region that inspires other regions to transform themselves in the area of sustainability.”  In her own consulting work, Kimberly takes Silicon Valley innovations in entrepreneurship to Japan and other countries.

Kimberly went on to say that she sees the valley as a model: “We want Silicon Valley to be a global example of a sustainable regions that the world can learn from, so as to create a global community, with the visualization center serving as a magnet for people to come together and share their vision.”

Kimberly and the Sim Center’s vision overlaps deeply with Decision Intelligence.  DI and the Sim Center are complementary approaches to solving the same problem: massive “wicked” problems that require us to understand interdependencies, to re-synthesize what are otherwise stovepipes of information and initiative.  Time and again, I see solutions that are limited because they don’t take interactions into account. The best example was a telecom CIO I met with once who told me: “We’ve optimized the KPIs in every department, but the company is still struggling.”  Why? Because optimization of a complex enterprise requires an understanding of the “whack a mole” linkages that are often hidden under the table: we improve in one area and it negatively impacts another.  Instead, working together in initiatives like the Sim Center aids a broader understanding.  And simulation exercises are exactly the right approach to pull it all together.

So I’m flying to San Diego too, leaving tomorrow (Tuesday) night.  Along with 15 other passionate advocates of the Sim Center approach, we’ll be collaborating in a workshop to learn the approach and to bring it to the valley.  My own goal is to facilitate the inclusion of Silicon valley technology such as great UX design, machine learning, massive data analysis, sensors, and more into an integrated approach that unifies the best of advanced technology and human collaboration.

Kimberly tells me that the plan is to create a prototype temporary location at first, then to learn from it, revise as needed, then to create an iconic bricks-and-mortar facility in which local students, community governments, and businesses can work together to effect change.

Please drop me a line in the comments with any steering thoughts or resource ideas that could help the initiative.  And I look forward to seeing some of you in San Diego!